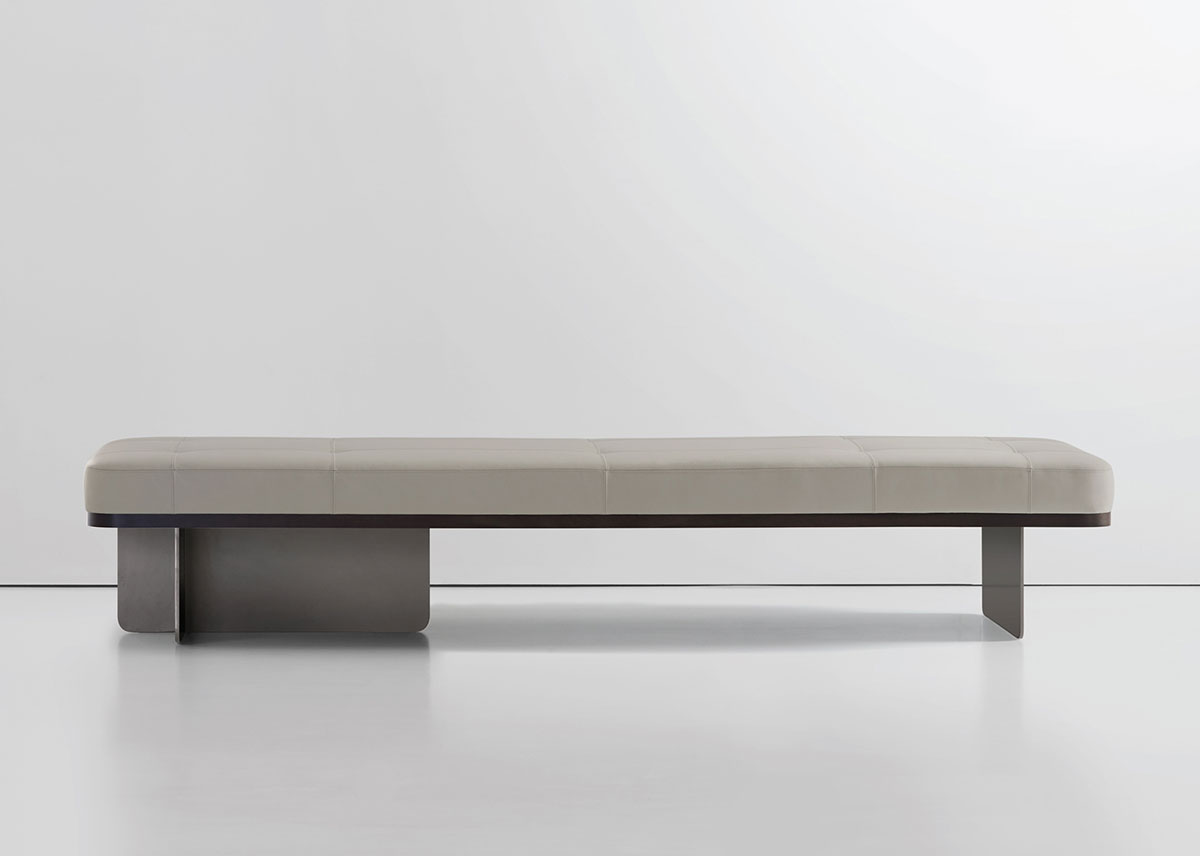 Inspiration often drives a particular person to bring out their unique talents to the world, encouraging creativity into the highest level of success. Terry Crews, a ubiquitous force in American culture, embraces this perspective in his mission as an artist. Continually exploring creative boundaries led Crews into developing his debut collection for Bernhardt Design 2017. The modern-day Renaissance man is once again proving his design talent with Elevation, a new collection launching in the Fall of 2018.

Elevation is a system of tables and benches that can be grouped in large public spaces or used as individual products in any setting. Jerry Helling, President of Bernhardt Design states, “The beauty of Terry’s collection is that it works well together as a body of work, but the individual elements integrate wonderfully with so many other types of furniture and settings. He created a group of product that touches all market segments from corporate, to public space and retail, as well as hospitality and residential.”

The breadth of work spans over 30 pieces incorporating an artful blend of wood, metal, and upholstery. Crews spent an extensive amount of time ensuring the collection achieved an appropriate balance and composition as a whole, while individually offering a sculptural appeal with geometric shapes and subtly curved silhouettes. “When I started sketching, I was inspired by the concept of layering and overlapping vertical and horizontal planes. From a distance or aerial perspective, Elevation embodies a modern metropolis showing the highs and lows of buildings in a cityscape.” says Crews. 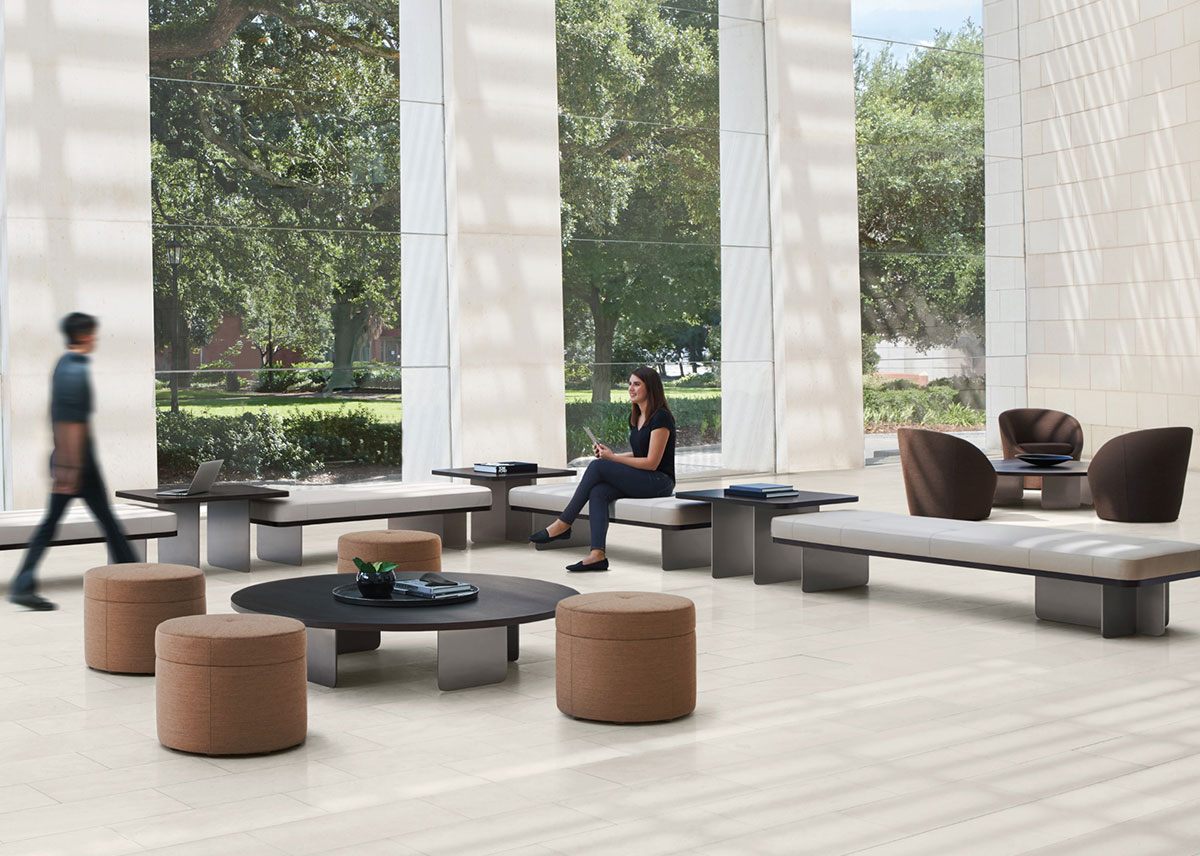 The benches give prominence to aluminum legs in bronze or matte black finish with two individualizing options – a blade-like fin leg, and an asymmetrical T-leg. Available in two and three seat versions, the bench cushions are accented with quilted stitch detailing. Four ottomans ranging in size from 18” to 36” also feature a quilted upholstery pattern. When grouping benches, two distinct tables are used to create a layered effect: a connecting table with fin legs and a corner table with T-legs.

The collection also features a wide range of tables using the fin leg vocabulary that speaks a design language composed of simple vertical and horizontal planes, maintaining a streamlined look with modern lines. Top options include round or square shapes, ranging from 42” to 60” in diameter, and are available in oak, walnut, laminate, and CorianÒ.

To balance the linear design, Elevation also includes a series of round and square drum tables in various sizes. Available in walnut or oak, the tables can accommodate contrasting tops in laminate or CorianÒ. Supporting the technology requirements of today’s public spaces, three different charging solutions are integrated into the drums. The first is battery powered wireless charging ports, the second is wireless charging with outlet plugs, and the final option is a standard powered grommet. 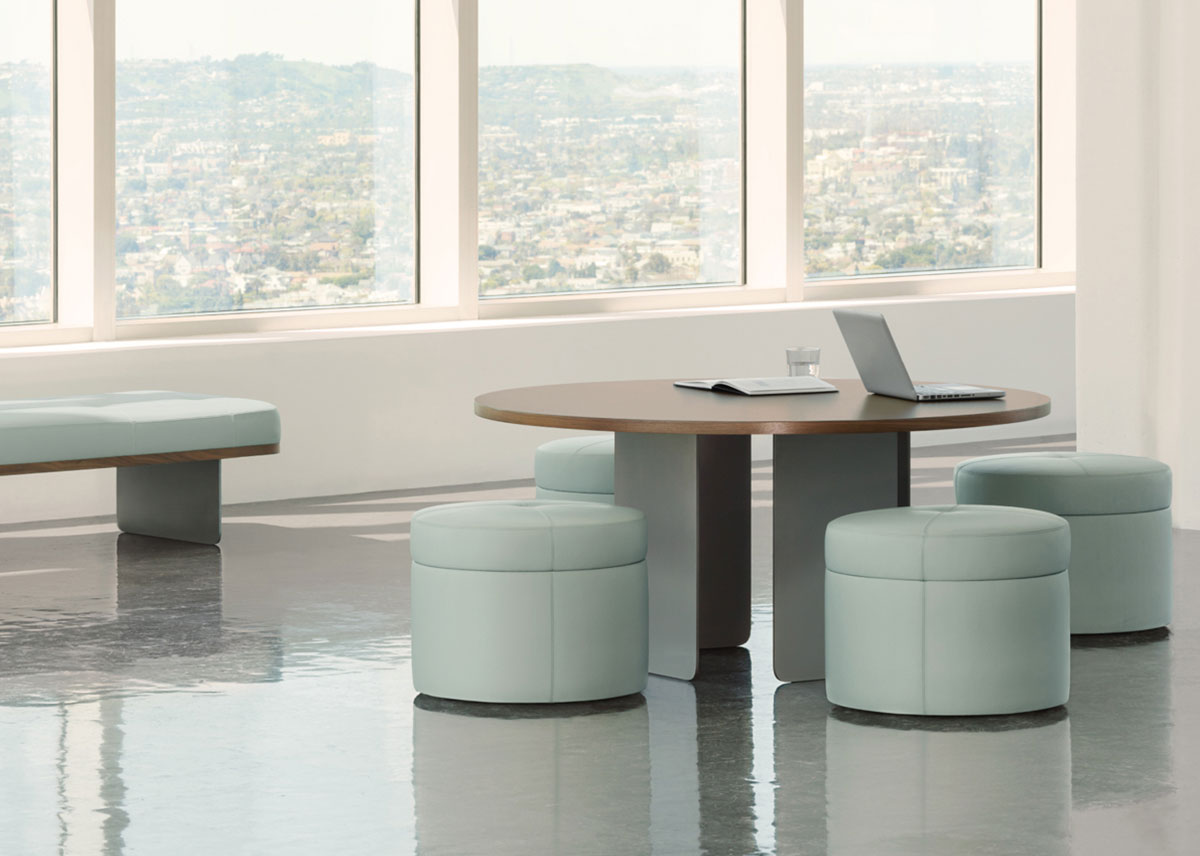 Action-movie hero, sitcom star, game show host, pitchman, former NFL player and best-selling author all describe the man that is Terry Crews. Crews is perhaps best known for his action and comedy roles in an impressive resume of film and television work which includes THE EXPENDABLES film franchise, Golden Globe award and SAG nominated comedy series Brooklyn Nine-Nine, Everybody Hates Chris, and stars in the wildly popular Old Spice commercials. He is also known for his ability to pull off what is considered the “best robot” on earth.

The three-time People Magazine “Sexiest Man Alive” star has toplined some of the biggest films of the past decade including his star-making turn in the Wayans brother comedy classic White Chicks and the cult classic Idiocracry, to the #1 film of all time on Netflix, The Ridiculous Six opposite Adam Sandler.

Crews also added author to his resume with the release of his first book, Manhood, in 2014, which has received critical acclaim, with Jezebel calling Terry “one of the most progressive and thoughtful voices in gender criticism.” Crews has also proven himself a frequent viral video collaborator, teaming up with Jimmy Fallon for their famous “Lip Sync” duet, starring in a Super Bowl commercial with the Muppets, and was featured as one of The New York Times “Scene Stealers” for his role on Brooklyn Nine-Nine. He also officially became a verb in the urban dictionary. 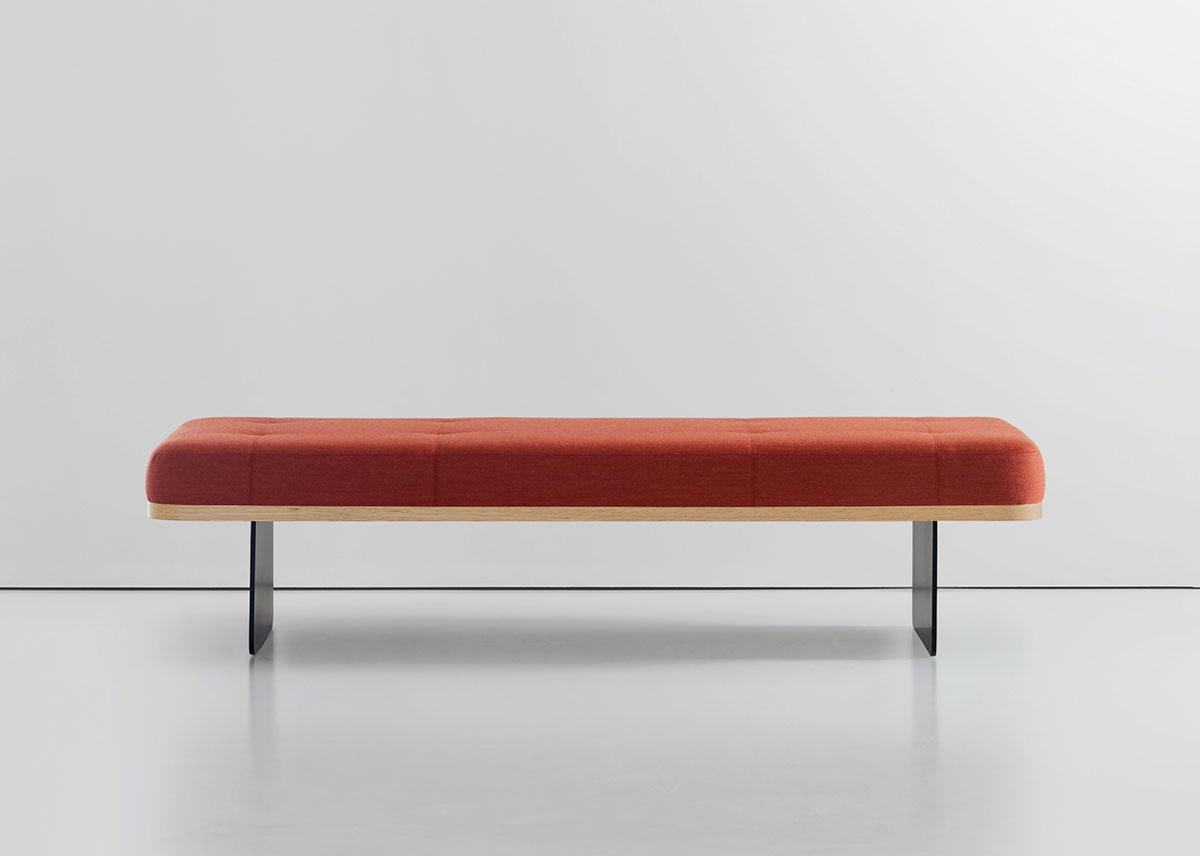 Behind the brawn, bullets, and laughs is a renaissance man from Flint, Michigan, who, as a teen, got his first big break after high school with an art scholarship at the prestigious Interlochen Center for the Arts in Michigan.

This was followed by an Art Excellence scholarship and a full-ride athletic scholarship for football at Western Michigan University, where as a star defense end, he helped lead the Broncos to a Mid-Atlantic Conference Championship in 1988.

After several years in the NFL (where he painted portraits of teammates to supplement his income) with the Los Angeles Rams, San Diego Chargers, Washington Redskins and Philadelphia Eagles, Crews turned his talents to the performing arts, where his talent, hard work, character and dedication has made him one of the most sought after and respected talents in the industry. 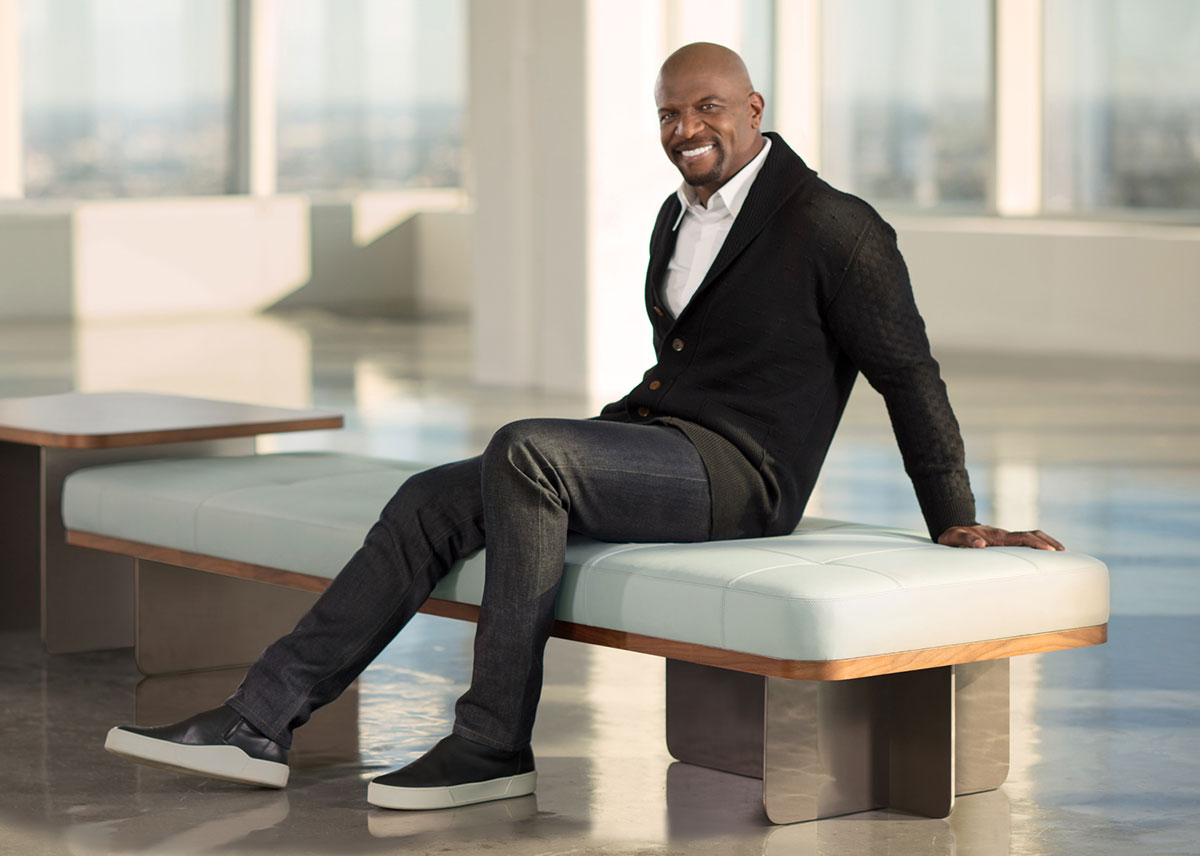 Expanding on his extensive background as an artist, illustrator, and his love of craftsmanship, Terry established

the design house AMEN & AMEN. The company seeks out and supports creatives in the world of art, music, fashion, decor and industrial design. Initially breaking ground with menswear fashion designer Nana Boateng, the label successfully expanded to interior lighting and furnishings in 2016 with the exhibition of Ini Archibong’s The Secret Garden collection at Salon De Mobile in Milan. In 2017 he designed his first collection of furniture for Bernhardt Design.

A true definition of success, Crews’ life off-screen is as exciting and dynamic as his public persona. Crews is the caring husband of 27 years to wife Rebecca and proud father of five. Crews dedicates his free time to keeping physically fit—both in mind and body while also working with The Polaris Project, a leading non-profit organization in the global fight against human trafficking and modern-day slavery.